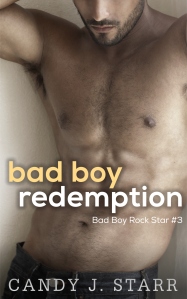 Bad Boy Redemption is now available in the Amazon store;

Life is sweet for Hannah and Jack. Finally, they’re together and Jack’s band, Storm, have been signed to a major label after completing a successful tour.

Then tragedy hits the band, sending Jack off the rails. Hannah wants him to make peace with the demons from his past but he refuses to take action. Meanwhile, Hannah has problems of her own when her father’s crimes are exposed, and are much worse than she’d ever expected.

Are they damned beyond repair or can their love redeem them?

This is the third and final book in the Bad Boy Rock Star series.

To celebrate the release, you can win a $25 gift card.