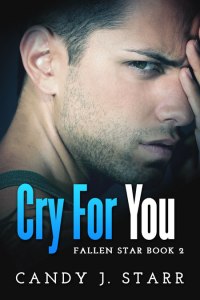 Cry For You is released this Friday!

I’ve been planning to post a teaser or two for a while but have been so caught up with writing book 3 that I’ve not done it yet.

You can get your pre-order copy at Amazon, iBooks, Nook and Kobo.

Hers was the face I searched for before we went into the encore. The only face that mattered. I scanned the crowd to the side of the stage, filled with the crew and other band members, but I couldn’t see her. With the number of people gathered there, it was no wonder. Devon gave me the signal and the song started. The festival was over and this was the song to take everyone home, the one that would be buzzing in their heads way into the night.

I’d been shitting bricks before I went on stage. Scared I’d lost it, that I’d never had it. That everything I’d achieved had just been a fluke. And terrified of something darker. That everything had to be paid for, and the price was far too high.

Without Ruby, I’d have still been huddled up under the covers at home. She’d pushed me to play the festival, almost forced me into it.

But that stage was made for me. She was right. It was the place where I came alive. Before, I’d played for myself, for the money and the hope of a brighter future. When that brighter future died, I thought I’d never play again. I’d done it all for Julie and, without her, I had no reason to go on. I’d blamed the music, I’d blamed Devon and I’d blamed myself. I’d wrapped myself up in a blanket of self-pity and hate so thick, I thought nothing could penetrate it.

Then she’d come along and the things that I thought had mattered, the things I needed protection from, disappeared and, in their place, was this crazy, red-headed woman who glowed with a mysterious light.

The encore song was a goodbye to Julie but it was also an acknowledgement of life. The need to say goodbye in order to let other things in.

I put my heart into it and the crowd loved it. Well, I think they did. They looked like a mass of mud monsters by the end of the rainy festival, primal shapes moving as one out of the sludge.
The cheers didn’t stop when I went off stage. They just kept screaming for more.

“Should we play one more?” Brownie asked but the festival promoter swept in with his talk of by-laws and regulations. It was impossible to go overtime. I’m not sure why. Would the cows in the paddocks have complained?

But where was Ruby? I expected her to be there, throwing her arms around me.

“Ruby?” I called, sweeping people aside. One fan made a grab for me but I side-stepped her. “Ruby?”

I hadn’t realised until that moment how much I’d been playing just for her. For her praise and her smile.

And don’t forget, book three – Be with You – is also available for pre-order. Just on Amazon at the moment, for release on 22nd June.